AI, Technology and Democracy - Nordic and Korean Professionals Gather to Discuss the Future of Humankind 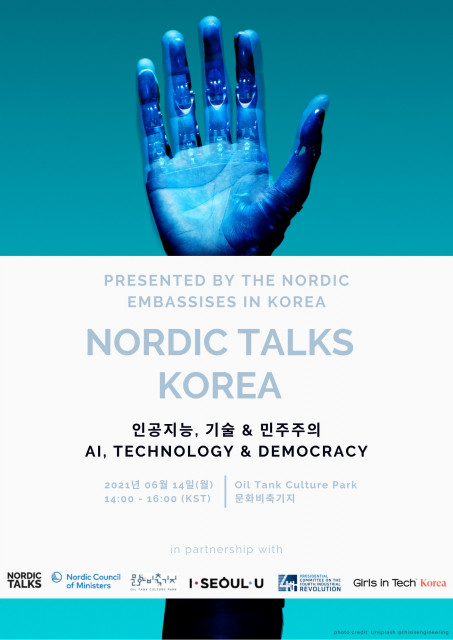 SEOUL--(뉴스와이어) 2021년 06월 14일 -- On June 14, the embassies of Denmark, Finland, Norway, and Sweden in Korea co-hosted a hybrid event to explore the role of artificial intelligence (AI) and technology in modern democracies. Titled ‘Nordic Talks Korea: AI, Technology & Democracy’, the event brought together top experts from the Nordics and Korea to present and discuss AI and the use of technology from different angles. The common theme for all speakers was a collaboration of public and private sectors and the responsible use of new technologies.

The second session explored how tech is positively impacting society, industries and planet Earth. The first speaker of the session was Finland’s leading expert in AI and ESG Ms. Meeri Haataja, CEO of Saidot. The second speaker for the session was Ms. Hayearn Suh, Head of Data Products of Kakao who shared insights into Kakao’s vision for a friendly digital world. Norwegian Ambassador Frode Solberg joined the two in the panel discussion.

The topic of this event was inspired by the shared goal of Korea and the Nordics for a responsible digital transformation. As democracies, Korea and the Nordics also share a value base, which makes transparent discussions on responsible use of AI and technology possible. Nordic countries have a long history in executing ESG that is an indispensable part of both public and private sector’s strategy. From this experience, the best practices could be shared as well as new practices created with technological innovators such as Korea.

“Digitalisation and new technologies, including AI, play a key role in our efforts to achieve the Sustainable Development Goals. We need to make further advances in order to meet the challenges posed by climate change, aging societies, and increased globalization. Over the past decades, technology has revolutionized how we deliver public services, operate our industries, and tech is also making our cities smarter. This is yet another area where the Republic of Korea and the Nordics are well positioned, and where we can share experiences on how to best handle future challenges,” said Ambassador Frode Solberg of the Norwegian Embassy in Korea.

“It’s important to remember that AI is already widely used in many everyday applications at work and at home. Among other things, I hope AI will be a powerful support to reduce carbon dioxide emissions. However, as strong democracies, we must also make sure to use AI for our purposes responsibly and safely. I was happy to discuss this more deeply at the Nordic Talks Korea event,” added Swedish Ambassador Jakob Hallgren.

Nordic Talks Korea 8 was conducted in partnership with the Nordic Council of Ministers, Oil Tank Culture Park, The Presidential Committee for the Fourth Industrial Revolution and Girls in Tech Korea.

This event is the eighth edition of Nordic Talks Korea since the series launched in 2019. Nordic Talks Korea is a flagship initiative by the Nordic Embassies aiming to start conversations about solving global challenges and inspire citizens to take actions for a more sustainable society. To date, the project has garnered over 195,000 reaches on social media, substantial media coverage, and a growing dedicated community.

Anne Marie Engtoft Larsen is Denmark’s Tech Ambassador with responsibility for representing the Danish Government to the global tech industry and in global governance forums on emerging technologies. TechPlomacy is a pioneering initiative elevating technology and digitalization to a crosscutting foreign and security policy priority of the Danish government. Prior to her appointment, Anne Marie worked at the World Economic Forum in Geneva (2017-2020) where she led the work on the Fourth Industrial Revolution and Global Public Goods. Her focus was on mobilizing technology companies, governments and civil society to collaboratively tackle the barriers that prevent emerging technology from scaling responsibly to help solve society’s biggest challenges. Anne Marie has co-founded an innovation house for student entrepreneurship; co-founded Democratic Capital and worked as a political advisor in the Danish Parliament. Anne Marie holds an M.Sc. in International Development from The London School of Economics and Political Science (LSE), a B.Sc. and M.Sc. in International Business & Politics from Copenhagen Business School.

Sungroh Yoon, Chairperson of the Presidential Committee on the Fourth Industrial Revolution

Sungroh Yoon is one of the world’s distinguished experts in the areas of artificial intelligence and big data, the two core technologies driving the 4th industrial revolution and holds a professorship at the Department of Electrical and Computer Engineering, Seoul National University. His achievement includes contribution in creating new industry and services leveraging the AI technology through academia - industry collaboration. In 2013, Sungroh Yoon was awarded the Young IT Engineer Award by the Institute of Electrical and Electronics Engineers and Education Award by Seoul National University, the most prestigious honor granted to the faculty of Seoul National University. His list of accolades includes Shinyang Engineering Award (2019), Korean Scientist and Engineer of the Month by the Ministry of Science and ICT (2018), IBM Best Paper Award (2018), Overseas Study Award by SBS (Seoul Broadcasting System) Foundation (2016) and many more. He has been publishing a number of research papers on the topic of AI and big data. Sungroh Yoon, born in Seoul in 1973, received his B.S. degree in Electrical Engineering at Seoul National University and M.S. and Ph.D. in Electrical Engineering at Stanford University for his studies in unsupervised machine learning. Sungroh Yoon also served as a senior engineer at Intel Corporation.

Meeri Haataja is the CEO and Co-Founder of Saidot, a start-up with a mission for digital sustainability and responsible AI ecosystems. Saidot is a platform for teams, who want to make their AI transparent and explainable, and invite their stakeholders into a dialogue around transparency. Saidot’s AI governance and risk management platform is used by major public and private organizations, such as the cities of Amsterdam and Helsinki, to operate their AI registers and communicate openly about their AI. Prior to starting her own company, Meeri was leading AI strategy and GDPR implementation in OP Financial Group, the largest financial services company in Finland. Meeri has a long background in analytics and AI consulting with Accenture Analytics. During her Accenture years, she has been working in driving data and analytics strategies and large AI implementation programs in media, telecommunications, high-tech, and retail industries. Meeri started her career as a data scientist in telecommunications after completing her M.Sc. (Econ.) in Helsinki School of Economics.

Commissioner Hayearn Suh is an expert on data, a crucial resource in the era of the Fourth Industrial Revolution. She founded data related startups in Korea and India with remarkable success. As the Head of Data Product at Kakao, Suh operates Kakao’s big data platforms, explores the business value of data across industries and develops them into businesses.

Suh was a data mentor for startup sponsors, such as Google Korea, Banks Foundation for Young Entrepreneurs D.CAMP, and MARU 180 launched by the Asan Nanum Foundation. In addition, from 2017 to 2018 she served as a scientific investigation advisor for the Korean National Police Agency, providing data analytics to help the agency develop statistical data on criminal investigations and solve cold cases. In 2020, Suh received a citation by the Minister of the Interior and Safety for providing advice on data from the national disaster management system.

Hyun Seung (Liz) Lee is a COO and co-founder of the digital agency TELEPASEE in South Korea. TELEPASEE serves new brands and companies to establish their online presence and thrive in their business. She received an award by the Ministry of Science and Technology Information and Communication of South Korea in 2020 and was selected to attend Mobile World Congress (MWC) in 2018. Liz is also the co-managing director of the global non-profit organization Girls in Tech Korea chapter focused on the engagement, education, and empowerment of women in technology. Girls in Tech Korea supports women by offering everything from coding courses to bootcamps to hackathons to startup competitions, for any woman, no matter her age or profession.

Prior to founding her own company, she worked at Korea Trade-Investment Promotion Agency (KOTRA) and Gangwon Art & Culture Foundation, where she implemented operational strategies and integrated systems to improve efficiencies in communication. Growing up in Korea, Canada, Peru, Indonesia, Italy and various cities in the US, Lee is a third culture kid and is passionate about inclusion, diversity, technology, and business.

Nordic Talks Korea is a flagship initiative by the Nordic Embassies in Korea that aims to start Nordic-Korean conversations about solving global challenges and inspire citizens to take actions for a more sustainable society. All events are centred in the 17 UN Sustainable Development Goals and open to the public. Besides inspiring talks from Nordic experts and engaging discussions with Korean opinion leaders and Nordic Ambassadors to Korea, a Nordic Talks Korea event also offers Nordic atmosphere, cuisine and beverages. Supported by the Nordic Council of Ministers, Nordic Talks Korea is affiliated with the Nordic Council of Minister's The Nordic campaign and Nordic Talks brand.

About Embassy of Finland, Seoul

Since establishing diplomatic relations on August 24, 1973, Finland and South Korea have expanded their political, economic and cultural exchanges and cooperation every year. The Finnish Embassy in Korea performs the following duties: Promoting political and economic cooperation between Finland and South Korea; Observe the Korean government's position on EU-related issues and report the details to the Finnish authorities; Consular work for Finns and visa work for foreigners; Spread information about Finland in Korea. 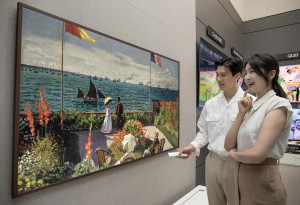