“With Harry Potter: Puzzles & Spells, we’ll be delighting fans with the memorable characters, sounds and stories of the original books and films,” said Bernard Kim, President of Publishing, Zynga. “But we’re also bringing more dimension to the match-3 genre. Players will earn XP and become more powerful, acquire and level up spells, engage in special events and connect and compete with one another through the Clubs feature.”

Players who pre-register will be among the first to be alerted when the game officially launches. Through the first week after launch, players who download the game for their Android or iOS device will instantly receive the Welcome Bundle, greeting them with special rewards and power-ups that will aid their gameplay. The bundle will also include a custom item for their in-game avatar, identifying themselves as true fans of the Wizarding World.

Harry Potter: Puzzles & Spells celebrates the affinity for challenge and mystery in the Wizarding World with its first match-3 puzzle game for mobile devices. Melding innovative match-3 puzzle gameplay with magic, players will encounter the most iconic moments and memorable faces from the original Harry Potter films. The game will also feature the original movie soundtrack and the authentic voice recordings from the films for characters including Hagrid, Dumbledore, Professor McGonagall and the Sorting Hat. Progressing through fanciful puzzle levels, players will utilize potions, spells and other magic abilities and objects on their journey through the Wizarding World. Players can join a club with fellow aficionados and collaborate on puzzle strategies, share lives and vie for prizes in exclusive Club Events.

Zynga is a global leader in interactive entertainment with a mission to connect the world through games. To date, more than one billion people have played Zynga’s franchises including CSR Racing™, Empires & Puzzles™, Merge Dragons!™, Merge Magic!™, Toon Blast™, Toy Blast™, Words With Friends™ and Zynga Poker™. Zynga’s games are available in more than 150 countries and are playable across social platforms and mobile devices worldwide. Founded in 2007, the company is headquartered in San Francisco with locations in the U.S., Canada, U.K., Ireland, India, Turkey and Finland. For more information, visit www.zynga.com or follow Zynga on Twitter, Instagram, Facebook or the Zynga blog.

Warner Bros. Interactive Entertainment, a division of Warner Bros. Home Entertainment, Inc., is a premier worldwide publisher, developer, licensor and distributor of entertainment content for the interactive space across all platforms, including console, handheld, mobile and PC-based gaming for both internal and third-party game titles. 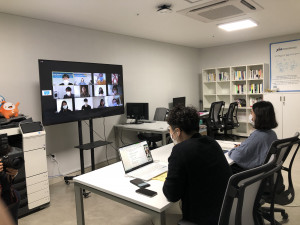